You might have heard a lot about the colorful mosaic of Indian festivals, culture and performing arts?.. And you might have seen a version of some of these in your home town too by the traveling performing artists! Here we stage the real, traditional performing arts through which the culture echoes, tradition speaks, beauty enthralls and diversity delights. 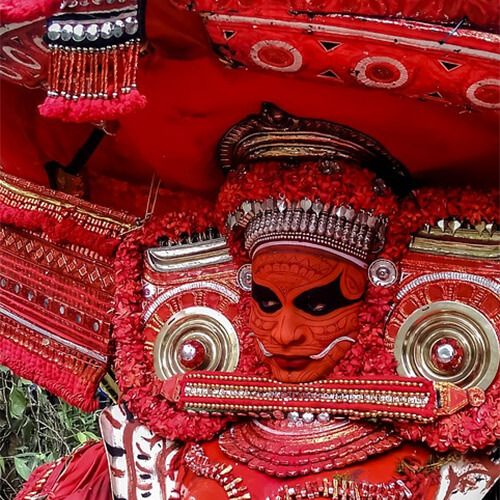 Theyyam is a ritualistic dance with rare costume and lively footwork. Theyyam represents a glorious period of folk life in kerala .During the performance souls of the dead heroes of the land and the gods and goddesses are supposed to come to the middle through the medium of the possessed dancers and converse with us on matters of even contemporary significance. It is the worship of spirits by invoking them to the mortal body of the dancer who impersonates them and gives blessing to the believers! The dancer (theyyam) transforms himself to the concerned deity with the help of his extreme devotion, preparation and the rhythmic chanting of mantras and thottam songs. Atmosphere is another important factor in creating the aura of divine splendour such as light, fire, open stage etc. 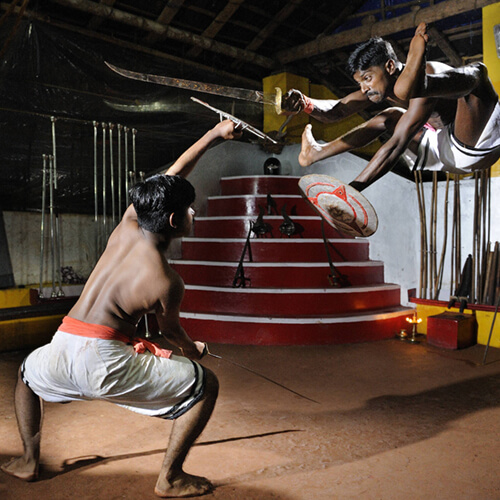 Kalarippayattu (Mother of all martial arts)

Kalarippayattu is the mother of all martial arts in the world .The holistic approach of the training is aimed at the ultimate coordination and control over mind and body. The inherent beauty of this art form lies in the harmonious synergy of art, science and medicine. Anyone and everyone- young, old, working professionals— can reap the benefits of the rich and treasured martial arts. It cures Arthritis, musculoskeletal problems, neurological problems etc. People from all over the world converge in to a small town called Thalassery to learn Kalaripayattu because of its amazing effects on health. We do give a chance for our guests to be introduced to this system of treatment. So join the spirit of celebration and make your time in India a memorable one with Chera rocks. 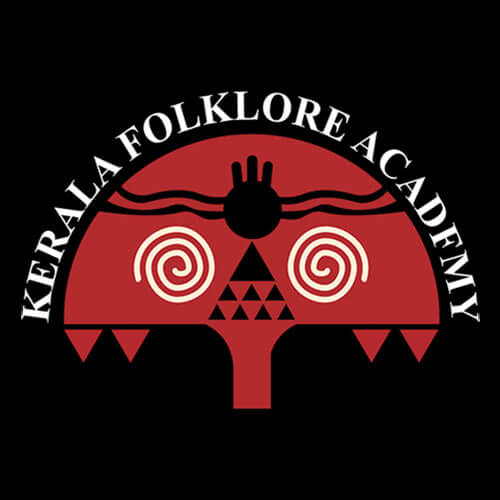 For those keen to follow and understand the artistic heritage during their visits to Kerala, it would be an ideal choice to drop in at The Kerala Folklore Academy, located at Chirakkal in Kannur, the northern district of Kerala.

Established in 1995, welfare of the folk artistes is the prime concern of the academy. Set up by the Government of Kerala, the academy, while ensuring the welfare of folk artistes also strives for reviving, preserving and promoting the rich folk art traditions of Kerala. The academy is located by the side of the beautiful Chirakkal Lake, which is reputedly the second largest of its kind in Asia.

The academy functions from traditionally built structure called nalukettu and presently houses a folklore library, and museum The library at The Kerala Folklore Academy features over 1000 volumes on the folk art traditions of Kerala and is one of the largest of its kind and a popular haunt of scholars and researchers in the field.

And checking out the museum at the academy, one would find a collection of over 300 precious objects of folk art, including life-size replicas of various theyyams and patayani,folk and tribal musical and percussion instruments, farm implements and weapons. Some of these items are used in ritual arts like Kuthurathib, Devakoothu, Chat, Poorakali, Kaliyootu, Mudiyettu, and Kaniyarkali. The museum also has over 175 photographs that depict the drama of these art forms. 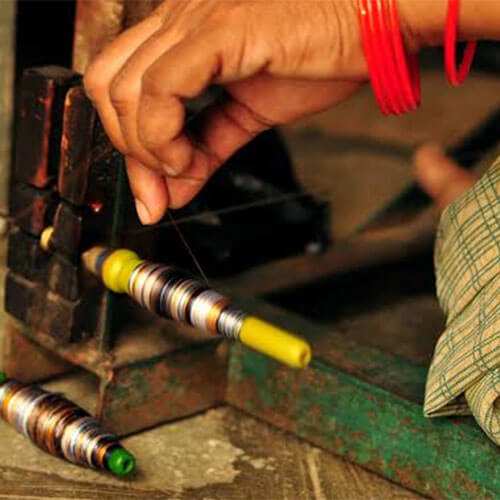 Craft design in India has an ancient history & was a highly used method for livelihood even before the British & Portuguese came in India. But after the emergence of foreign power and machines, most of the art and craft works lost its value. Indian handicrafts tradition has a unique place in the world, both in variety and in technique & use of materials.

Sargaalaya craft village the Kerala Arts & Crafts village in Kerala is an initiative by the Department of Tourism, Government of Kerala. It is an initiative to put Kerala’s traditional handicrafts on the tourism trail.

Sargaalaya craft village focuses on creating a tourist destination, centered on hands-on interaction between tourists and artisans, who create, display and market their crafts on site. The strategy being, to make Kerala’s traditional crafts an integral part of the tourism experience while also providing sustainable development for the artisans economically.

The craft village is set up on 20 acres of land on the banks of the Moorad River, just 45 km from our property . The craft village has 27 cottages where, a hundred or even more artisans can work.

We arrange opportunity to visit